We recommend employing TEM analysis in the early stage of your product development to make informed decisions at the right time.

Our AAV Express service guarantees a turnover time of only 4 lab workdays.

Adeno-associated virus (AAV) is one of the most commonly used delivery vectors in gene therapy. An AAV is formed by a closed virus capsid encapsulating a single-stranded DNA. Three types of capsids are produced during the production of AAV vectors; empty, partially filled, and filled capsids. Empty and partially filled AAV capsids are considered impurities as they either lack genomic material or contain only fragments of the transgene that give the vector its functionality.

On the other hand, the filled AAV capsids are the target of production since the full-length transgene is incorporated. The presence of impurities will affect the efficacy and safety of AAV vector products since they increase the risk of immune reaction to the product. Furthermore, the presence of empty or partially filled capsids can obstruct the transduction of the filled AAV capsids by competing for vector binding sites when administered to patients. Therefore, it is essential to determine the amount of these impurities (partially filled and empty AAV capsids), as well as the desired filled AAV capsids. The ratio of filled and empty capsids is a critical quality attribute requirement for any AAV vector manufacturing process. Cryogenic TEM (cryoTEM) oTEM allows the inspection of AAV samples in cryogenic conditions to study their structure close to their native state. This allows the observation of the internal structure of the AAV particles and provides a distinct discrimination between filled and empty capsids (Figure 1).

Our proprietary VAS software is used in combination with cryoTEM images to accurately provide statistical data on the distinction between filled, partially filled (intermediate) and empty AAV capsids, see Figure 2.

Figure 2 - A representative histogram (left) displaying the percentages of filled, empty and intermediate AAV particles, as determined from semi-automated detection. Particle classification is based on internal density analysis of each particle. The corresponding image (right) shows the detected and classified particles overlaid with red/blue/green circles.

Validated method for your own product

Throughout the years Vironova has been providing validation, feasibility, and qualification studies for determining filled and empty AAV ratios for different companies in the gene therapy field. In a validation plan we specify the design and acceptance criteria for a validation study, aiming to verify that the client-specific analytical procedure using cryoTEM is suitable for measuring the percentage of filled AAV particles in a specific product. The study is done according to Vironova’s standard operating procedures (SOPs) and the principles of Validation of Analytical Procedures, ICH Q2 (R1). For example, the validation study includes tests for specificity, dilutional accuracy, repeatability, intermediate precision, linearity, and robustness. The validation of this method must be tested for your own product.

Other types of impurities apart from the empty and partially filled capsids, which are commonly produced during the manufacturing of AAV vectors, include host cell proteins, mammalian DNA, and other contaminants. These contaminants may influence the immune response to the product. Negative stain TEM (nsTEM) provides detailed information about overall morphology of the AAV samples. The overall morphology includes integrity of the AAV particles, presence of debris/impurities and characterization of clusters/aggregations. Some example images are provided below in Figure 3.

Aggregation is a severe problem during the purification of AAV vectors. There is no accurate method to fully characterize this phenomenon. However, nsTEM can be used as an orthogonal technique to study the aggregation of AAV vectors. We offer this service (Figure 4) on demand. Please contact us for further information. 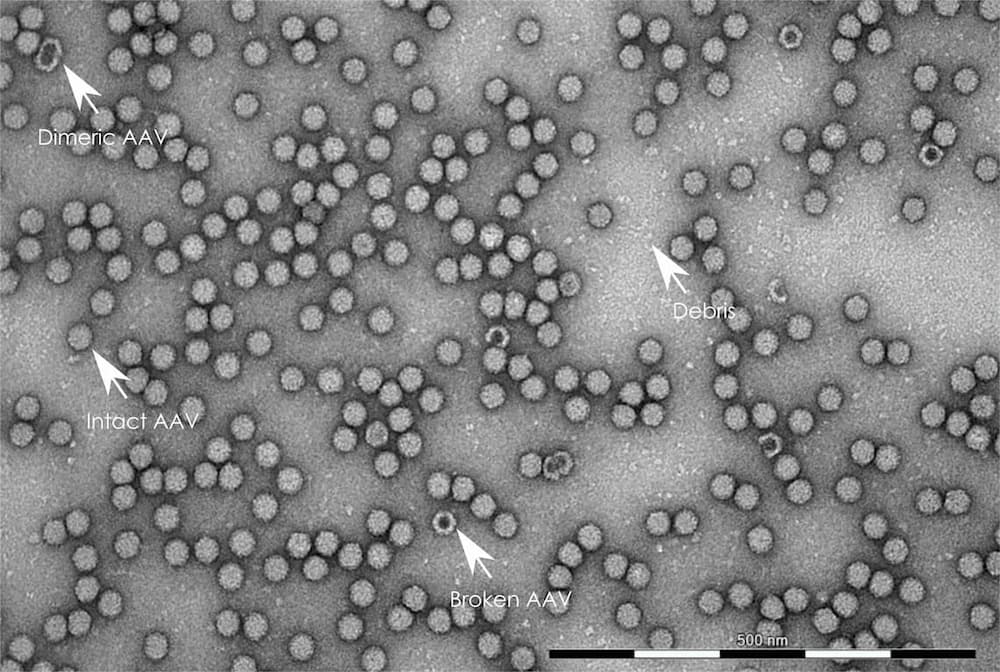 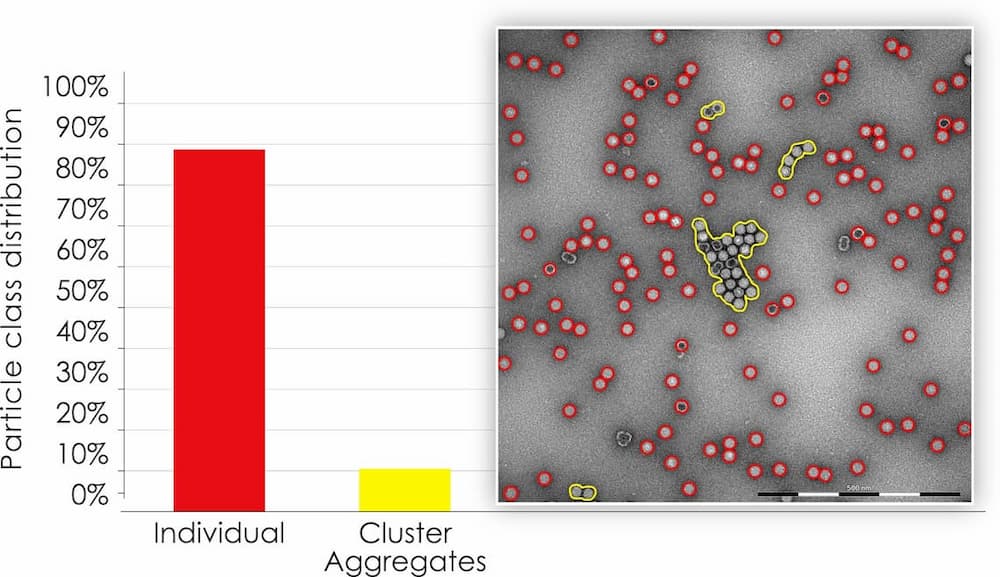 Figure 4 - A representative histogram (left) displaying the percentage of individual and cluster/aggregate AAV particles, as determined from semi-automated detection. The corresponding image (right) shows the detected and classified particles overlaid with red circles and yellow outlines.

Negative stain TEM (nsTEM) provides useful information in tracking all the steps of the upstream and downstream processes  in the monitoring and screening of purification steps. As illustrated in Figure 5, the nsTEM images allow the user to make an informed decision about the various purification conditions.

What are the technical differences between nsTEM and cryoTEM for AAV analysis?
In both techniques, 3 µL of the specimen is typically deposited on a copper grid coated with a hydrophilized carbon film, which serves as support for the sample. The excess sample is then blotted-off, leaving a thin film of specimen.

In cryoTEM, the grid is immediately plunge-frozen in liquid ethane, at temperatures around -180 °C. The specimen is then kept in liquid nitrogen until it is inserted into the microscope and is imaged at cryogenic temperatures. In cryoTEM, the specimen is preserved in a hydrated environment, close to its native state.
Whilst in nsTEM the excess sample is blotted-off, leaving a thin film of specimen, and asolution of heavy metal salt is then deposited on the support and the excess is blotted-off. The grid is then inserted and observed in the microscope at room temperature. In this method, the stain acts both as an embedding agent and a contrast-enhancing agent.

The following table shows the analysis potential of both techniques:

Why do Vironova use cryoTEM for the characterization of the percentage of filled particles in AAV samples?
In the example below, a comparison of results from the analysis performed on AAV samples using cryoTEM and nsTEM is shown. Thrree different samples composed mainly of particles representing three classes: empty (S1), filled (S3) and a mix of sample S1 and S3 (S2), were analyzed.

The results obtained from the analysis of the images from cryoTEM versus nsTEM are illustrated below:

The results shown in the graphs demonstrate that the two methods, cryoTEM (left) and nsTEM (right), when used to analyze AAV particles with internal dark pixel intensity measure two different characteristics. The cryoTEM shows the expected linear correlation of the increasing concentration of filled particles. This proves that the particles observed with cryoTEM with internal dark pixel intensity represent particles containing DNA.

The particles characterized with nsTEM that show internal staining do not show any correlation with the increasing concentration of DNA but instead exhibit a flat trend. This is mainly caused by the differences in the two techniques. In cryoTEM, the sample is embedded in a thin layer of ice, which allows the observation of the internal composition of the particles. Therefore, in cryoTEM images, if the capsid contains DNA there will be an internal pixel density (dark particle), while if the capsid does not contain DNA the internal density will be very close to the background of the image.

Can TEM be used to study aggregation?
Due to technical differences nsTEM is more suitable for aggregation studies. Cluster/aggregation analysis is recommended  for comparison studies between samples with similar formulations, to obtain a relative assessment of their cluster/aggregate state. The analysis of an individual sample is also possible although this needs to be optimized by us for your own product. Please contact us for further information.

What is the optimal buffer composition of the sample in terms of sugar, salt, and others? 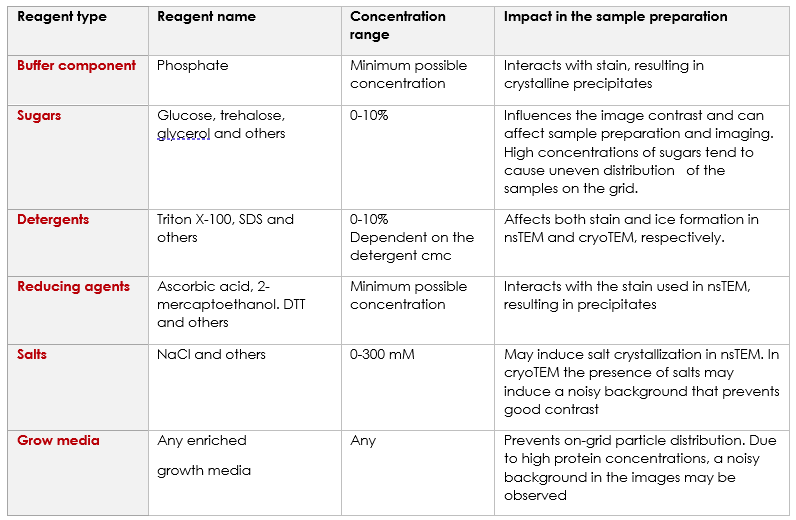 Although Vironova are specialists in GMP-certified analysis, is it possible to perform a non-GMP analysis?
Yes, we provide non-GMP analysis in cases where there is no requirement for GMP compliance.

Please contact us if you have any questions about the content on this page, or anything else related to our electron microscopy services. We're more than happy to help!

Our portfolio of analyses

Please see a detailed and more profound description of the different analyses we offer in our electron microscopy services below.

Request example reports of the type of analysis you are interested in below.

We have various example reports of different types of analyses available for you to download. The reports provide a deeper insight into what to expect from our electron microscopy services.

The example reports are free and easily accessed via this link: 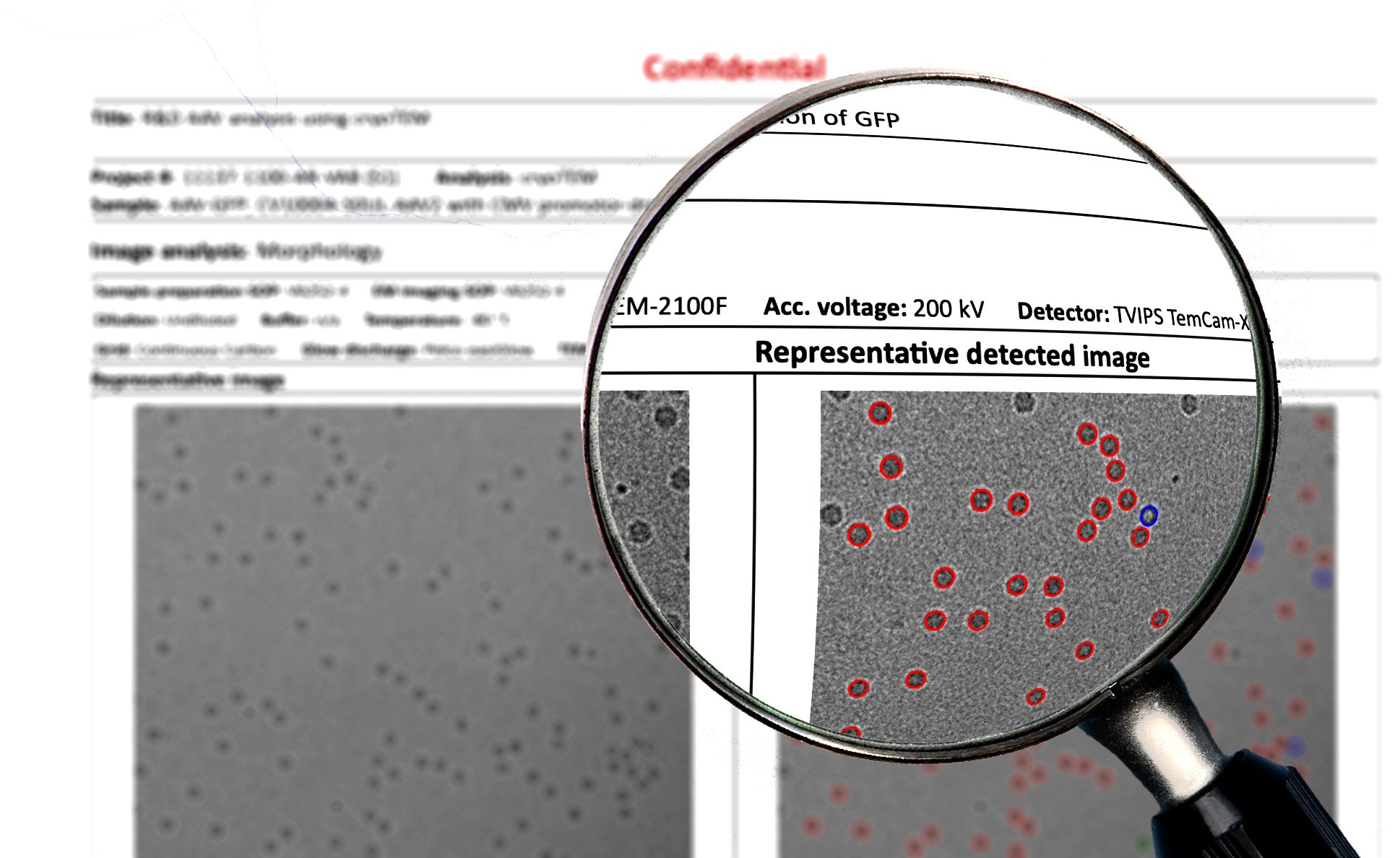